You have been wondering for a good place to rely on when you go out for a cooperate trip. Olive Service Apartments has come up with best service apartments in Ahmedabad for making your stay better and convenient. These

kinds of service apartment in Ahmedabad are fully furnished, guaranteed comfortable and easy to live in apartments for your business stays. Therefore, if you are looking for best place to go for rather than hotels, these service apartments in city centre Ahmedabad also have self-catering services with kitchen.

Be it for the long term stay or quick tours, the service apartments come up as the best options and there comes the requirement in Ahmedabad.  A great number of hotels and offices are looking forward for a perfect place to set their offices. The Service Apartments Ahmedabad is the best options there.

With altered structures, our private homes are outfitted completely and accompany a separate kitchen. All comforts like Tata Sky, Wifi Internet and Cleaning administrations are incorporated.

We have a prepared group accessible to answer every one of your inquiries in both pre/post booking stage. They are accessible available to come back to work and amid your stay to address any of your issues.

For Weekend Packages & Special Long-Stay Offers on rental Serviced Apartments in Ahmedabad, please CALL us at +919999011603 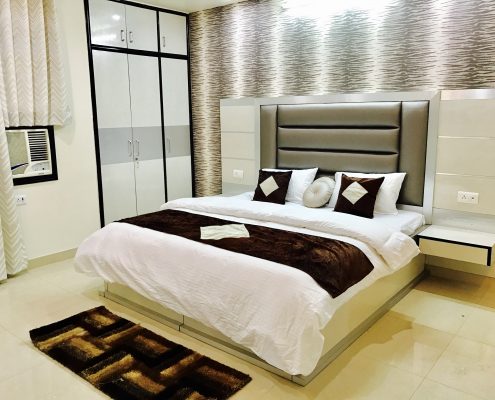 * Deluxe Rooms
We offer budget rooms of 230 sq ft along with king-sized beds & attached bathrooms. They include facilities like flat screen TV with Tata Sky HD under the Bed & Breakfast plan. You will also be offered access to a shared kitchen. If you are looking for short-stay, comfortable yet economical staying facilities, then these would be the perfect option for you.

* Studio Apartments
These apartments have been designed for a couple or single executives who desire more space along with the Kitchen facility. Our studio apartments offer an area of 400 sq ft which comes with Couch seating and kitchenette. It includes Hot Plate, Microwave, Toaster, Refrigerator and basic Crockery. The Studio also has Queen bed and attached bathroom besides a flat-screen TV with Tata Sky.

* One Bedroom Apartments
Our most popular and top-selling apartments are the perfect options for Single Executives & Couples. These apartments are spread over an area of 500 sq ft along with a King/Queen sized bed and an attached bathroom. It also consists of a separate living room along with a sofa and dining table. There will also be a fully equipped kitchen

* Two Bedroom Apartments
The Two Bedroom apartments are designed to accommodate traveling groups and small families. They are spread over an area of 950 sq ft and consist of 2 separate bedrooms with King/Queen sized bed. A living room with a couch and a dining table with balcony. There is a fully equipped kitchen with Stovetop, microwave, toaster and other utilities.

* Three Bedroom Apartments
These apartments have been setup for families and friends who are traveling in groups and also to accommodate corporate guests. They are spread over an area of 2200 sq ft with 3 separate bedrooms along with Twin/King/Queen sized beds. All of them have 3 separate bathrooms along with a living room. They also have a spate dining area and a balcony. The kitchen is fully equipped with all the accessories like Gas, Refrigerator, Toaster, Microwave, and others.

We are the top-rated Serviced Apartments & Vacation Rentals Holiday Homes in Ahmedabad with Kitchens.

Providing you full privacy and complete control, these service apartments are available on rent in various sizes such as studio apartments, one room, two rooms and three rooms. These holiday homes offer you cleaning services, gas, Wi-Fi internet all included in the monthly or weekly rent with unlimited discounts. These are the flexible service apartments that can be your vacation rentals.

Check out our Team

Book unhesitatingly realizing that we will give you a Complete Refund in the event that you are not content with the administration nature of Olive Service Apartments Ahmedabad. No Questions Asked!

What others say about us

Olive Service Apartments Ahmedabad is an enchanting little spot in the core of  City Ahmedabad. It is in a territory with extraordinary bistros and eateries. It is an extremely brilliant and spotless and all around planned. The washroom is staggering, very 5-star! No clamor from outside so it was ideal for somebody like me who is a light sleeper. I truly valued the completely stacked Kitchen and determination of manuals. It’s an open and excellent condo with superb staff! Exceptionally prescribed.

The host of the boutique stay knows the place and the city very well to curate an authentic Ahmedabad experience.The apartment is lovely, quite spacious and comes with its own kitchen! It is central to many restaurants, bars, and tourist attractions as well as being close to a main road which makes the city easy to navigate. Additionally, Deepak & Team could not have been more welcoming and helpful during our stay. Thank you for making our trip so memorable, we would love to visit again in future.

Can’t express what an impressive spot this is, I would give 6 stars in the event that I could! The reclamation has been so affectionately done, the scrupulousness in every single Apartment that accompanies its own Kitchen. The morning meal is incredible you can pick between Western or Indian cooking and both are great. By and large extraordinary loft!

The Apartment was amazing! We were 4 adults and a baby, it was a very quiet and comfortable stay. The food is delicious and freshly prepared and the atmosphere is homely and welcoming! It was also very clean. The parking space was also good. But the fact that you are in centre of Ahmedabad is definitely the biggest plus! We all loved it and will come back for sure!

Pushkar SethLondon
Ahmedabad is one of my most loved urban communities because of its vivacious road life and compositional legacy. The Olive Service Apartments Ahmedabad and their staff are extraordinary, the City neighborhood is astounding. The condo is similarly as delightful as the perspectives. Next time I end up in Ahmedabad, I will unquestionably be hoping to remain here first.
Sanjay RajBangalore
My niece, cousin and I came to Ahmedabad for an end of the week visit and did not have any desire to remain in the run of the mill enormous inn. This spot was prescribed to us by different individuals so we remained here. Truly agreeable and strategically placed unit with incredible pleasantries including our very own Kitchen and marvelous staff that are constantly accessible available to come back to work. We may never remain in a lodging again!
Koshik MehtaAhmedabad

Continuously book direct with Olive Service Apartments Ahmedabad. You are then guaranteed to get the most reduced conceivable rate for any our condos over some other channels.

Our Serviced Apartments in Ahmedabad are spread over different areas and are ideal for Corporate Housing in Ahmedabad & Short Term Rentals near CG Road, Ambawadi, Prahladnagar, South Bopal & Bodakdev Rajpath Club Road. We also have serviced apartments in Mehsana & Gandhi Nagar as well as expanding to Baroda & Surat as well.

About the City of Ahmedabad

Ahmedabad (also Amdavad, Ahmedabad or Ahemdavad) is the largest city in Gujarat. This is a stunning metropolis with ancient history, lots of interesting buildings, maze of old quarters, excellent museums, good restaurants and amazing night markets. Although the old-world charm almost disappeared under the pressure of traffic, crowds, dirt and sharp contrasts between wealth and poverty inherent in the 21st century, many travelers stop here on the way to Rajasthan or Mumbai to go to the Sabarmati ashram (Sabarmati Ashram; former head office Gandhi). You will have to make a lot of effort to get acquainted with the city, because it is stretched and movement on it is difficult.

Ahmedabad was founded in 1411 by Sultan Gujarat Ahmed Shah at the place where, according to legend, he saw a hare who was chasing a dog (the sultan was surprised by the bravery of the hare) . The city quickly grew beyond the citadel on the eastern shore and in the XVII century. became one of the best cities in India, a thriving shopping center with beautiful Islamic architecture. His influence weakened, but from the second half of the nineteenth century. Ahmedabad was revived again as a huge textile center (Manchester of the East). By the end of XX century. Many mills were closed here, and the subsequent economic crisis led to widespread atrocities in 2002, when more than 1,200 people were killed, mostly Muslims. Today, Ahmedabad is experiencing another bloom as a center for information technology, education and chemical production.

The main attraction of this road is the Tindarvaza Triple Gate crossing it. Not far from them is Mahatma Gandhi Street, where the Jama Masjid mosque, erected in 1423 by Ahmad Shah, has been preserved. On Fridays, you can see crowds of devout Muslims who came to Friday prayers. During the construction of this temple were used the remains of the destroyed Hindu and Jain shrines. It is assumed that the black slab that adorns the main arch was once the basis of the Jain deity. 260 columns, decorated with beautiful carvings, support the fifteen domes of the mosque. Lattice windows allow light to pass inside the premises.

But east of the Jama Masjid mosque, not far from the eastern entrance, there is a jewelry market on Manek-Chowk. Next to him stands the tomb of Ahmad Shah, in which the sultan, his son and grandson are buried.

In the heart of the market stands Ranik-Hazira – the mausoleum of the wives of the Sultan, of which there were several dozen. The layout of this tomb is similar to the tomb of Ahmad Shah.

Southeast of Manek-Chowk is located the Rani Si-pri mosque, which the locals called Masd-yid-i-Nagin. Its exquisite proportions and high thin minarets give a special chic to this street.

North-west of Manek-Chowk raises a mosque of Rani Rupmati, dedicated to the Sultan’s wife, born in India. This sanctuary was built in the middle of the XV century. In appearance, you can see both Hindu and Muslim motifs. Stone grates were preserved here, behind which the female half of the house was located.

Not far from the station rise the famous Reeling Minarets, which suffered during the 2001 earthquake? Tourists are not allowed here.

To the west of the Sabarmati River lies New Ahmedabad, the unique structures of which were erected according to the drawings of Le Corbusier and the American Lewis Kahn.

The Sabarmati Ashram is a collection of huts with tiled roofs that more closely resemble a colony of Spartans. This area has earned fame in times of war for the independence of the state: this is where the general headquarters of the leaders was located..

** NEW: You can also contact us for arranging Private Tours to Ahmedabad City, these Day Trips are organised with transport by private cars and drivers who will double-up as guides.

We can sort out private City Tours of Ahmedabad for every one of our visitors where they can visit all the significant sightseers’ attractions and do all their Souvenir Shopping.

We can likewise arrange Day Trips of Ahmedabad Site finding in Private Cars for our regarded visitors with expert Drivers who additionally go about as Guides.